Which States and Countries Do U.S. Residents Want to Relocate To?

The world has changed shape lately. And many U.S. homeowners are looking for a new nook to occupy.

The pandemic unmoored some employees from their fixed workplace – and freed them from working 'in commuting distance.' Many are thinking hard about where their home and family will be safest from the ravages of climate change: in one Forbes Home survey, 30% “cited climate change as a reason to move in 2022.” It’s a collective moment of reappraisal.

Much of that reappraisal remains tentative. Home-moving figures have wobbled upward since March 2020, but search data shows that interest in moving abroad has soared by as much as 29%. And just over half of America's moves in the past two years were unexpected, according to that same Forbes survey.

Americans have always moved around, but today, our horizons are wider. So, home warranty company American Home Shield decided to find out which cities, states, and overseas destinations Americans are thinking of moving to and which cities and states they most want to leave.

American Home Shield analyzed the number of Google searches for “moving to x,” swapping x for every American state, the 100 most populated cities, and every country worldwide. We used these figures to identify the places residents of each city and state would most like to relocate to and visualized our results in the maps and charts below.

The average American moves 11.4 times in their lifetime. The culture of economic migration has been ingrained since before the Gold Rush, but motivations are two-pronged. Some move in aspiration of the American Dream, and some move by necessity. And then, there are those who are displaced when others arrive. 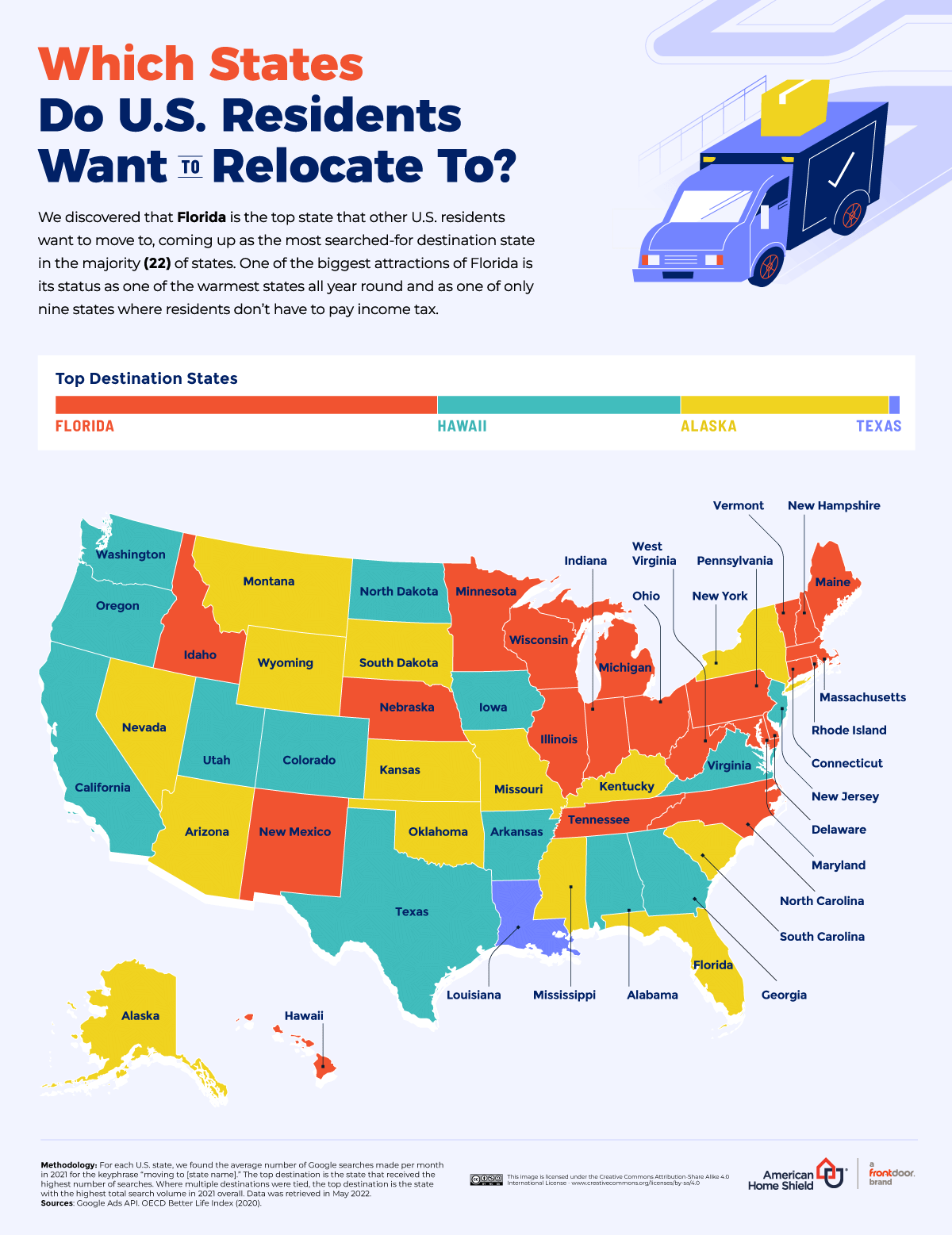 Americans want to move south. Or north. Florida is the most southern state in the contiguous U.S., and Hawaii is the most southern of all. They are the first- and third-most desirable relocation spots for U.S. residents. Sandwiched in second place is America’s north spot, Alaska, where residents of 14 other states most commonly dream of moving within the U.S. One in eight interstate relocations lands in Florida, where there is no state income tax (Alaska, too), and an affordable cost of living, making it an appealing climate for remote workers. 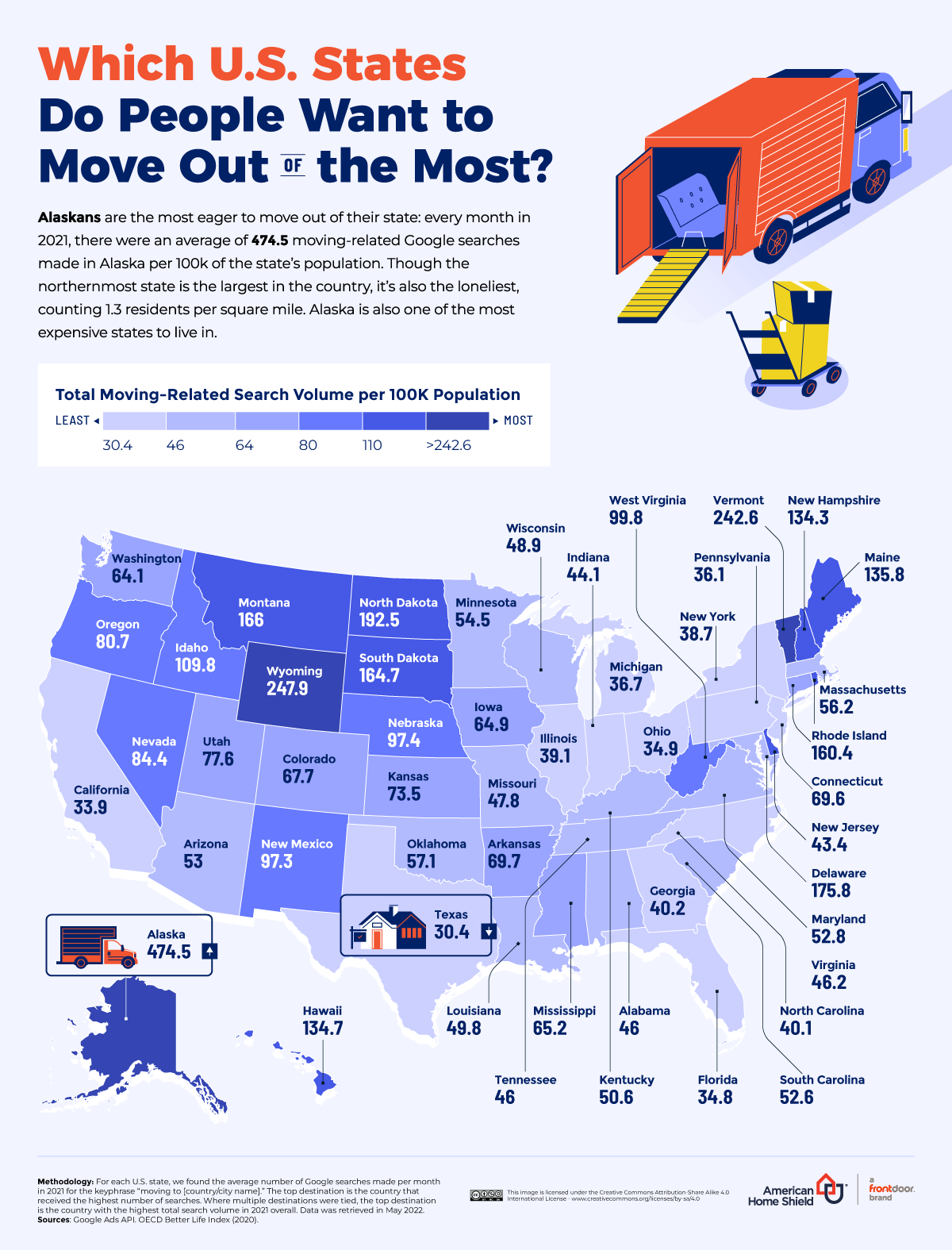 The lure of Alaska is ambiguous. Not only do our figures prove it a popular dream destination, but it is the state that locals are most actively searching to move out from, with a whopping 474.5 searches per 100,000 (compared to just 247.9 for second-placed Wyoming). Those who dream of Alaska are lured by low taxes, an 'authentic' lifestyle and landscape (think: hunting and fishing), and cooler weather. But the flipside includes a high cost of living and the fast-developing effects of climate change in a front-line region that’s warming faster than any of the Lower 48.

America Wants to Move to Canada

The attractions of moving abroad are manifold, from cheaper property to lower crime rates and from exotic landscapes to diverse international communities. But different destinations offer different advantages. 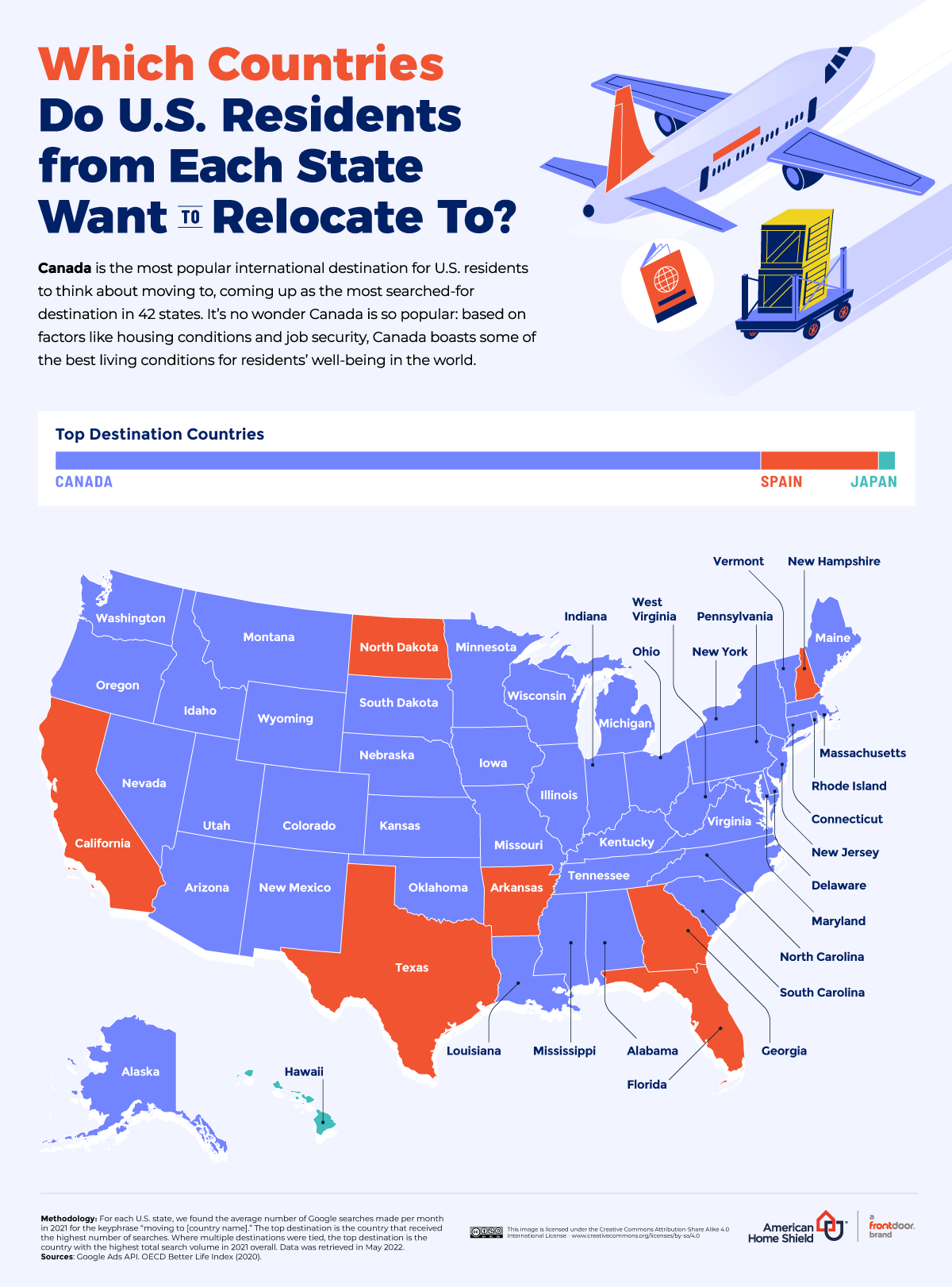 Americans' most common dream of moving abroad involves relocating to Canada, which comes out top in 42 states.

Everyone Wants to Move to NYC, but New Yorkers Prefer Miami

While talk of leaving one’s home city is a national pastime, only a small proportion of us actually pack up and go. In the first year of the pandemic, 84% of moves in the country’s 50 biggest cities ended up within the perimeter of the same city’s central metro area, according to Bloomberg. Ironically, New York City saw the highest departure levels – despite our findings revealing it to be the most desired destination for residents of 52 out of the largest 100 U.S. cities.

NYC’s allure is also its downfall. Everybody wants to live there for the bustle and the business opportunities – but high demand and a steep rich-poor divide make it an expensive prospect. New York regularly tops lists of America's most expensive cities for living. Miami's warmth and relative affordability made it a natural alternative during the pandemic when tens of thousands of New Yorkers made the one-way trip. Miami remains the most-searched alternative city among New Yorkers. 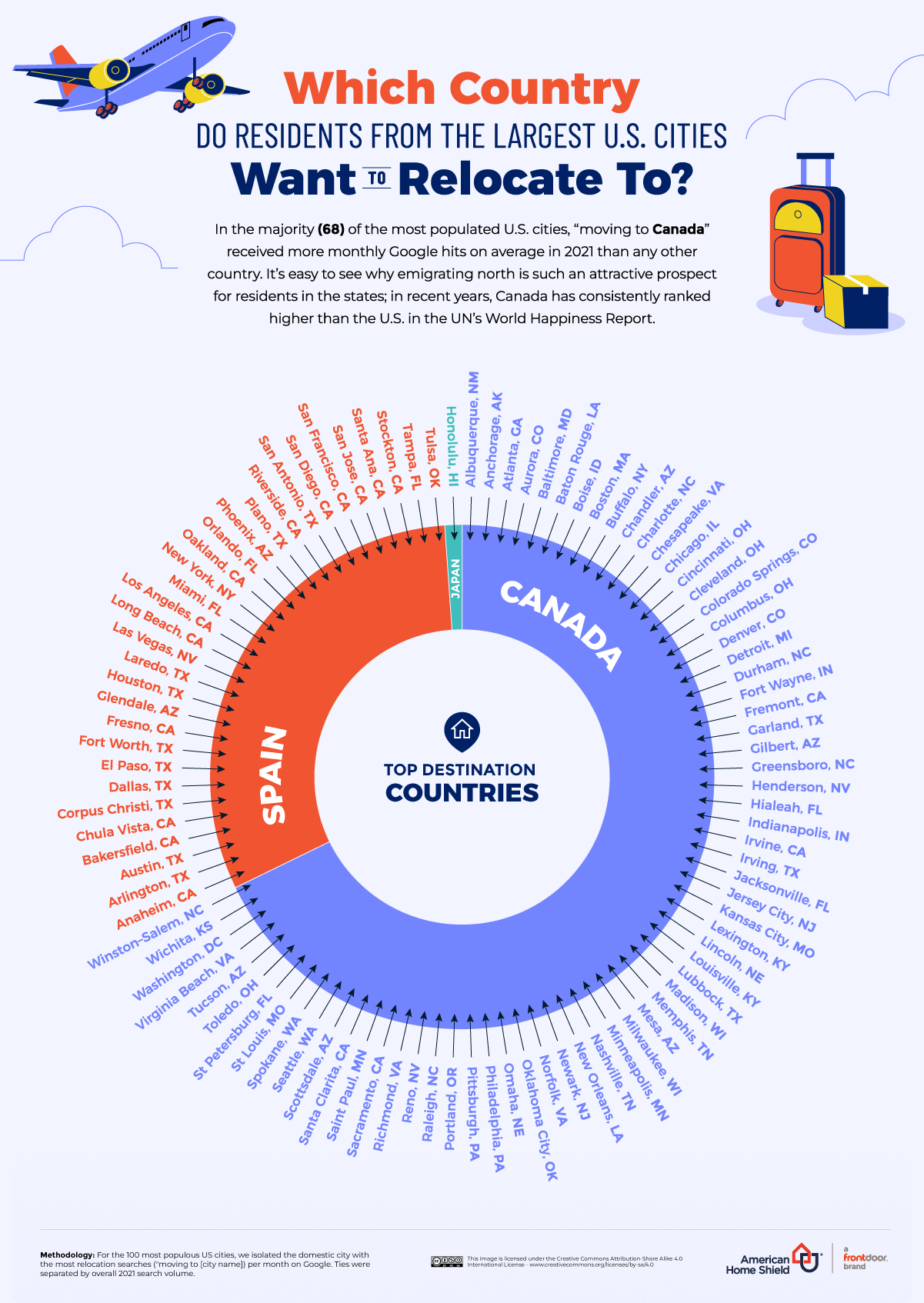 City-dwellers considering the move abroad echo the state-level results, with 68 of America's biggest cities mostly dreaming of Canada. Meanwhile, 31 cities – mostly Texan and Californian – are searching for information about moving to Spain. Many follow through on this dream: Spain boasts Europe's largest American population and endured a 13% rise in U.S.-born residents between 2019 and 2021.

A Nation of Migrants… and Homemakers

The U.S. is a nation of migrants. The last major upheaval was after World War II, when Americans relocated to the suburbs, attracted by the affordable homes, pleasant lifestyle, and the freedom to commute to work in their shiny new cars.

But not everybody wants to leave town or country. Some can’t bear to leave their friends or neighborhood. Many have worked hard to buy and improve their home. These are life values that should not be underestimated. And there are prudent measures to counter the economic issues that tempt you, such as investing in a home warranty plan to protect against regular or unexpected maintenance costs. That's just good sense – wherever you make your home.

The data on search volumes for each "moving to... " keyword term represents the average number of monthly searches and was obtained from Google Ads API using DataForSEO, with search volumes recorded with the location set to a given state or city. In cases where multiple destinations were tied by the average number of monthly searches, the destination with the highest total search volume over the past year was selected as the most searched.

NO TWO HOMES ARE THE SAME. THAT'S WHY WE HAVE OPTIONS. FIND A PLAN THAT FITS.
Shop Plans
See more in:
Home Buyers Homeowners