The Most Popular and Valuable House Styles in the U.S.

‘Architectural determinism’ is the idea that the design of a building changes the behavior of the people who dwell in it. A different layout and features might make you feel more peaceful, more productive. It could even help you learn to ‘live life as art.’

But can the architectural style of a home affect the price that buyers are willing to pay for it?

Certainly, some house styles have a far larger average selling price than others. And one MIT study found that ‘good design’ has several positive outcomes for a new house:

American Home Shield® wanted to discover which styles of home might fetch you a higher price and which are the most commonly sold around the US. We sourced ‘sold’ listings from Zillow and calculated the sale numbers and average price for each style in-state and across the country. And we identified the most ‘uniquely popular’ in each city and state.

From Beach House to Mobile Home, the 20 Most and Least Expensive U.S. House Styles

The most and least valuable house types in the U.S. illustrate how home style and location often go hand-in-hand. Beach Houses and Mediterranean-style homes are the most expensive in the U.S. and are often found on prime land close to the ocean. Large windows and balconies accentuate the use of natural light, which adds a feeling of luxury and simplicity to a home. 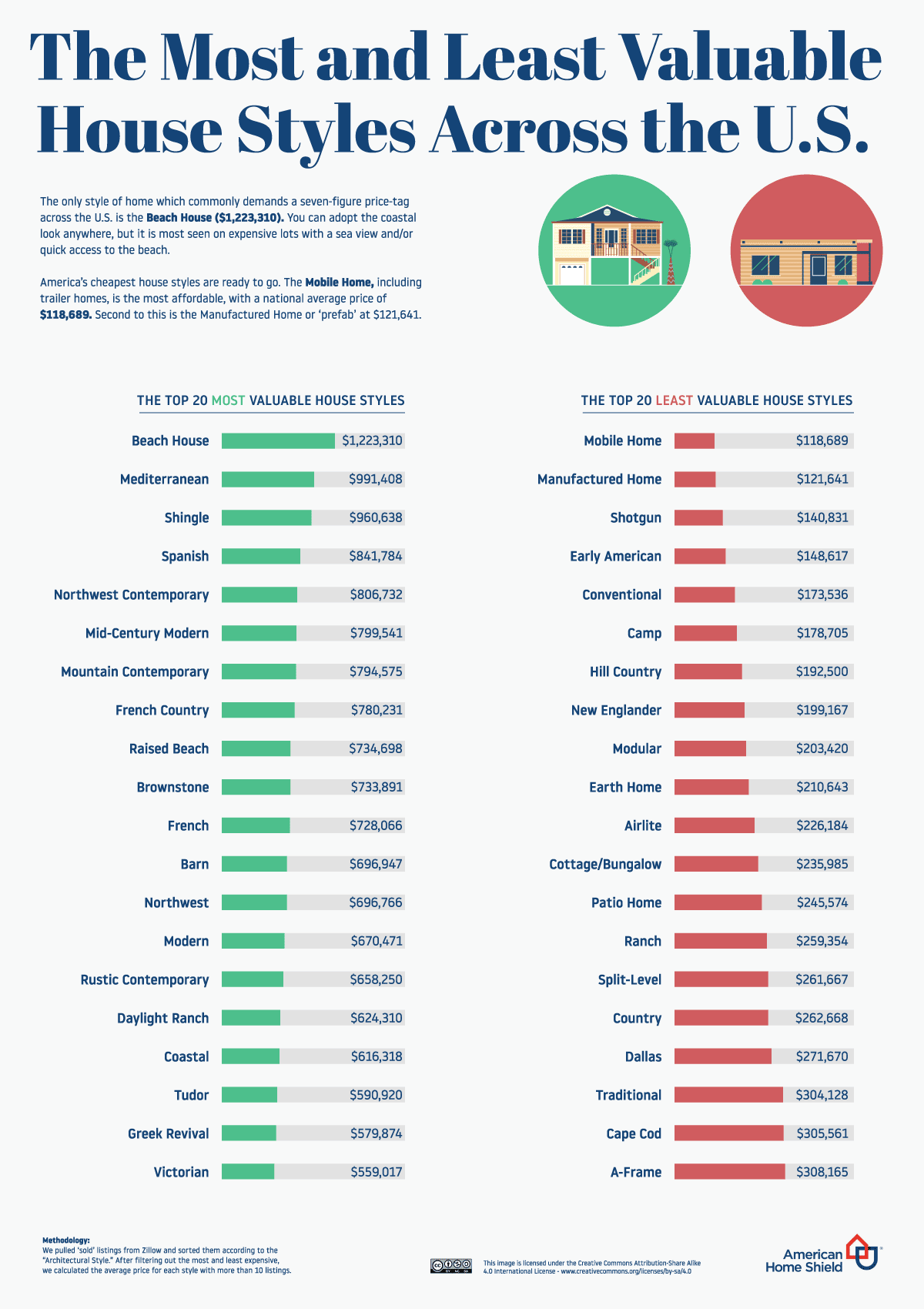 The average beach house costs more than ten times the average mobile home. The stigma of the mobile home park keeps prices low, but reduced taxes and land rental fees make buying a mobile home an all-around saving - if you can escape the economic structures that prevent many buyers from scaling up.

These House Styles Cost the Most in Each State

The Traditional architectural style is one of the most common currently sold in the U.S. However, Iowa is the only state where it is most expensive. Traditional style combines elements of different classical styles, such as Farmhouse and Neoclassical. As such, America’s Traditional-style homes are an eclectic bunch – but you can expect sturdy materials and emphasis on the non-showy, practical arrangement of windows and floor plans. 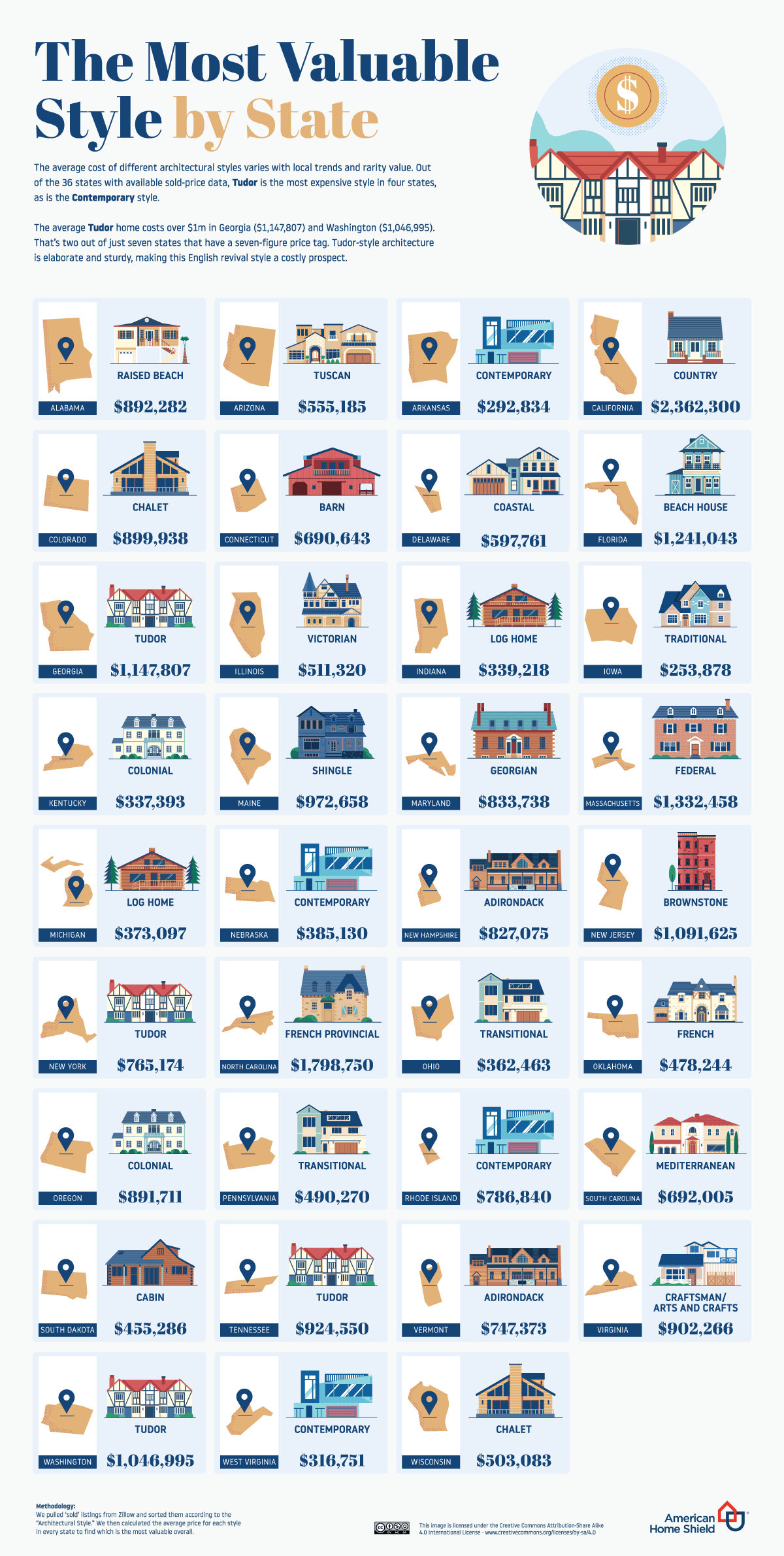 Michigan and Indiana have their most expensive house style in common: the log home. This style can be a low-cost build for Thoreau types, but more often works out expensive due to the premium on rural land and the expense of wiring/plumbing a remote construction (while forests cover 53% of Michigan, Indiana is relatively unwooded). Holiday home feature creep can also push up log house prices for those who love luxury.

The Ranch House is America’s Most Commonly Sold Home

Ranch-style housing is the most popular across 20 states. This American classic was built in such quantities in the mid-twentieth century that it prevails through sheer force. The ranch house offers space and, occupying just one floor, cradle-to-grave accessibility. Plus, it is plain enough to be affordable – and resalable. 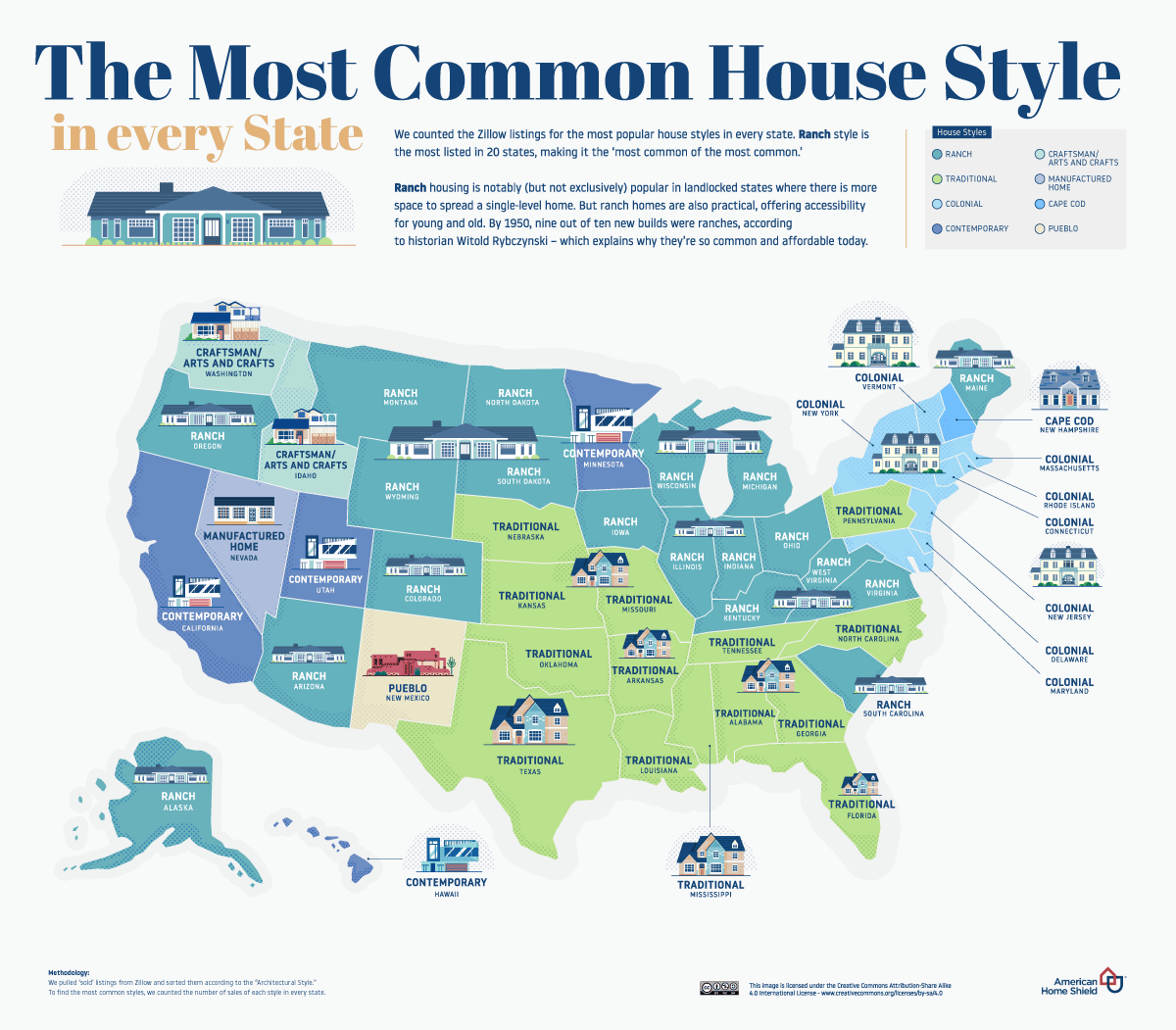 How Every State Bucks the House Style Trends

Next, we figured out the most ‘uniquely popular’ home style in each state by seeing which types stood out statistically from place to place. In Pennsylvania, the high number of Airlite-style homes sold is due to their commonness in PA cities such as Philadelphia. An airlite is a terraced home that differs from the narrower “straight-through” rowhouse by positioning the kitchen and diner side-by-side. Since they make a good first home, airlites often come up on the market as young homeowners move onwards and upwards. 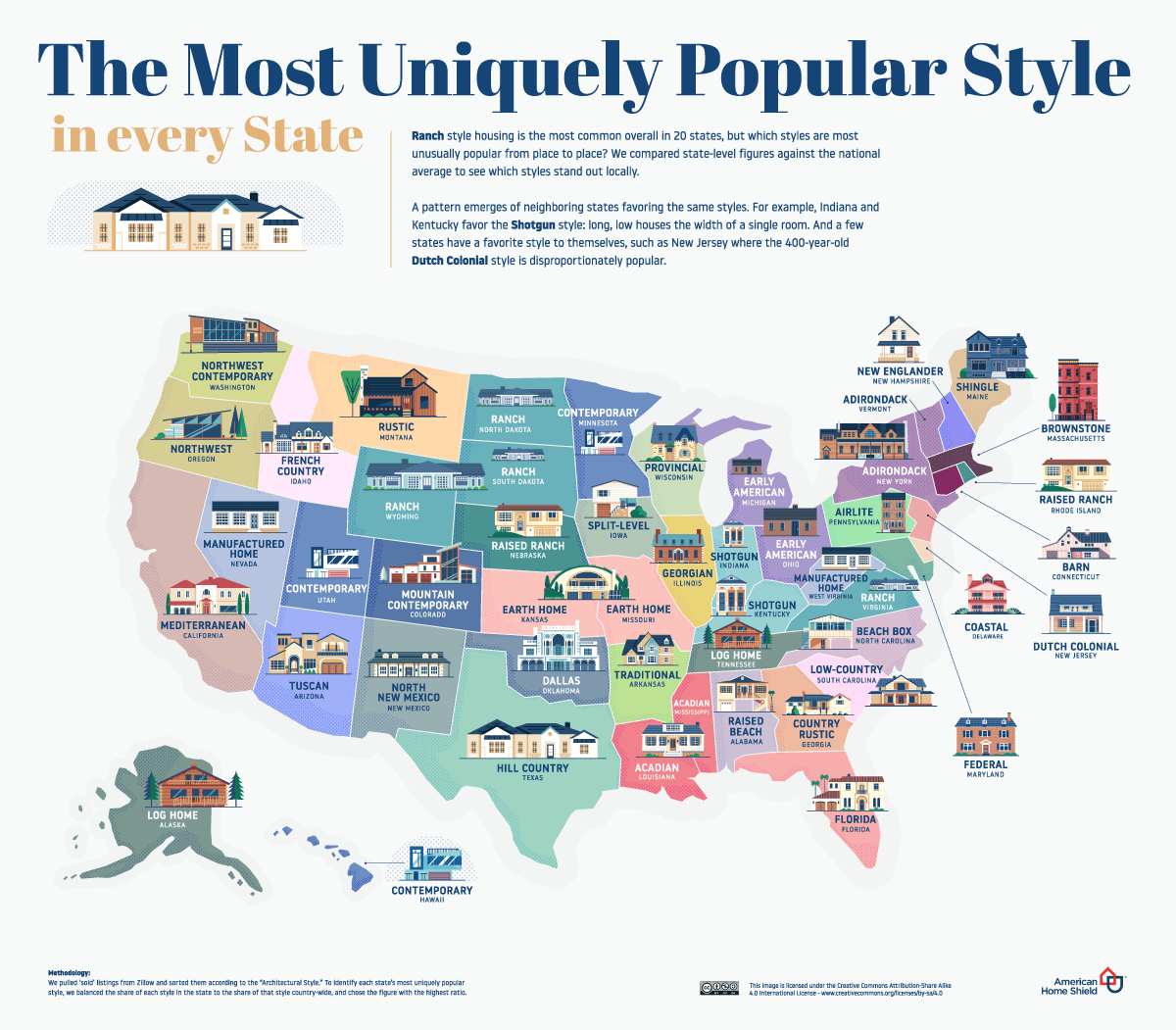 Sunnier climes encourage a more exotic approach to home design. Arizona is the only state with the Tuscan style as its most uniquely popular. Named after the dreamy Italian region, Tuscan-style homes take advantage of their natural surroundings. Architects favor local stone and timber for the structure, with terracotta and stucco details right at home in the warm climate. This outdoorsy feel segues into the actual outdoors with a prominent patio or portico.

Which House Style Draws Attention Near You?

Finally, we calculated the most uniquely popular home style in 45 big cities and shared it along with our state-wide data in the interactive table below. So, while Country Rustic is the ‘most Georgia’ style on a state level, the Atlanta market prefers the more urban American Foursquare – a no-nonsense, boxy family home that offers maximum room space on its footprint.

Choosing a house style to build or buy is a complex matter, as you weigh your own taste against the market’s preferences and the character of the neighborhood. But however you choose to proceed, there are a few good principles to stand by:

Seek advice from those you trust and filter voices that you don’t.

If you’re passionate about your project and can inspire your team (be they designers, contractors, or real estate agents), you will get more out of the process than an anonymous investment.

We pulled the data on Zillow’s sold listings across the United States using apify's Zillow Real Estate Scraper. Some states were omitted from our pricing research as they do not provide sold listings values to Zillow.

We filtered the data using the “Architectural Style” field and counted the most commonly sold styles in every state.

To calculate the most uniquely popular style in every city and state, we balanced the share of each style in the city/state to the share of that style country-wide and chose the figure with the highest ratio.

We then calculated the average price of each style state-wise and in the United States overall, including only the styles with at least 10 listings. To eliminate the impact of extreme values, we dropped 25% of listings with the highest prices and 25% with the lowest prices.

The data was collected in January 2022.

NO TWO HOMES ARE THE SAME. THAT'S WHY WE HAVE OPTIONS. FIND A PLAN THAT FITS.
Shop Plans
See more in:&nbsp;
Homeowners 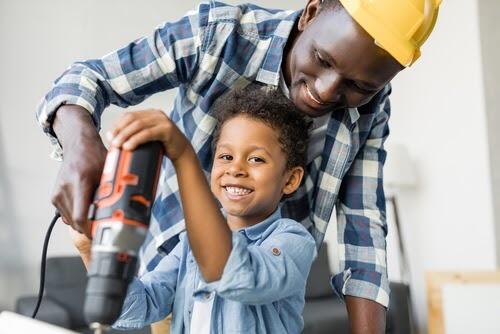 11 Tools Every Kid Should Learn How to Use

11 Tools Every Kid Should Learn How to Use 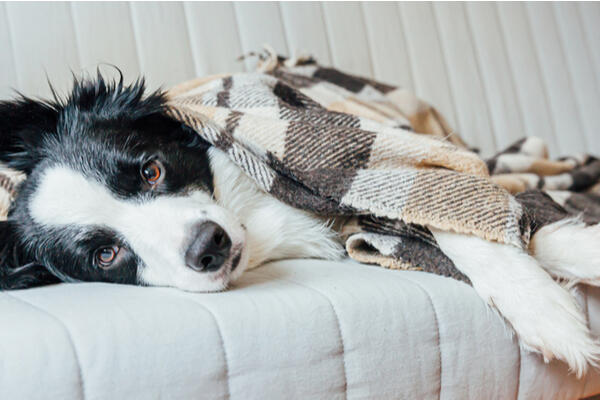 Preparing Your Pets for Winter Weather

Pets that spend some or all their time outdoors need your help in colder weather. Check out these tips to keep your pets happy and healthy. 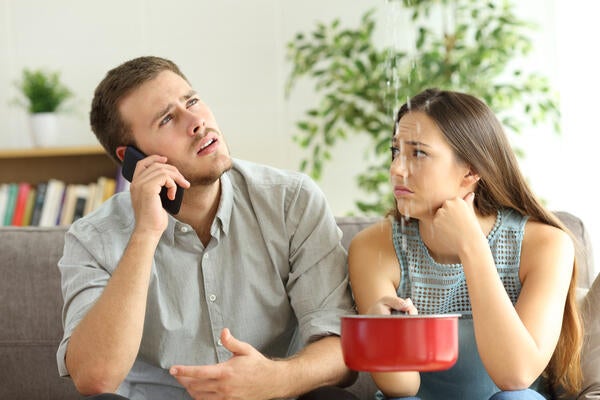 What to Look for When Comparing Homeowners Insurance

Find out more about what to look for when comparing homeowners insurance policies. 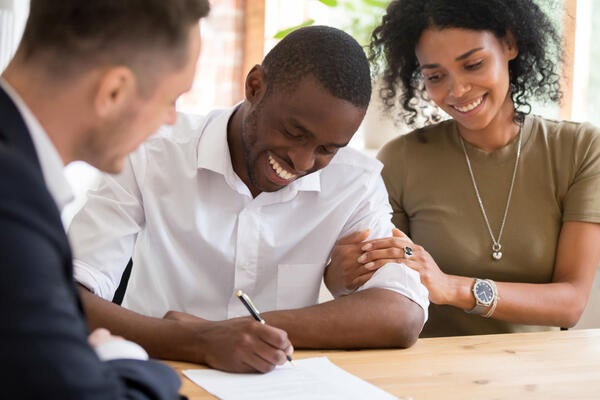 How to Pay Your Mortgage Off Early

There are a few ways to pay off your mortgage faster. Follow these tips for a quicker route to owning your property.