The history of architecture is a history of changing demographic, cultural, and social trends. In its relatively short history, American architecture has evolved alongside the changing face of the country, representing the patchwork of diverse cultural influences that constitute the United States as a whole. Many elements of American home design have also stayed the same over the last 450 years, reflecting longstanding traditions and values in the country that have stood the test of time.

Our journey through 450 years of American homes begins with the Cape Cod style home. Built with one story and little ornamentation, the modesty of Cape Cod style homes reflects the values of the Puritan colonists who designed them, as well as the harshness of New England weathers they were built to withstand. 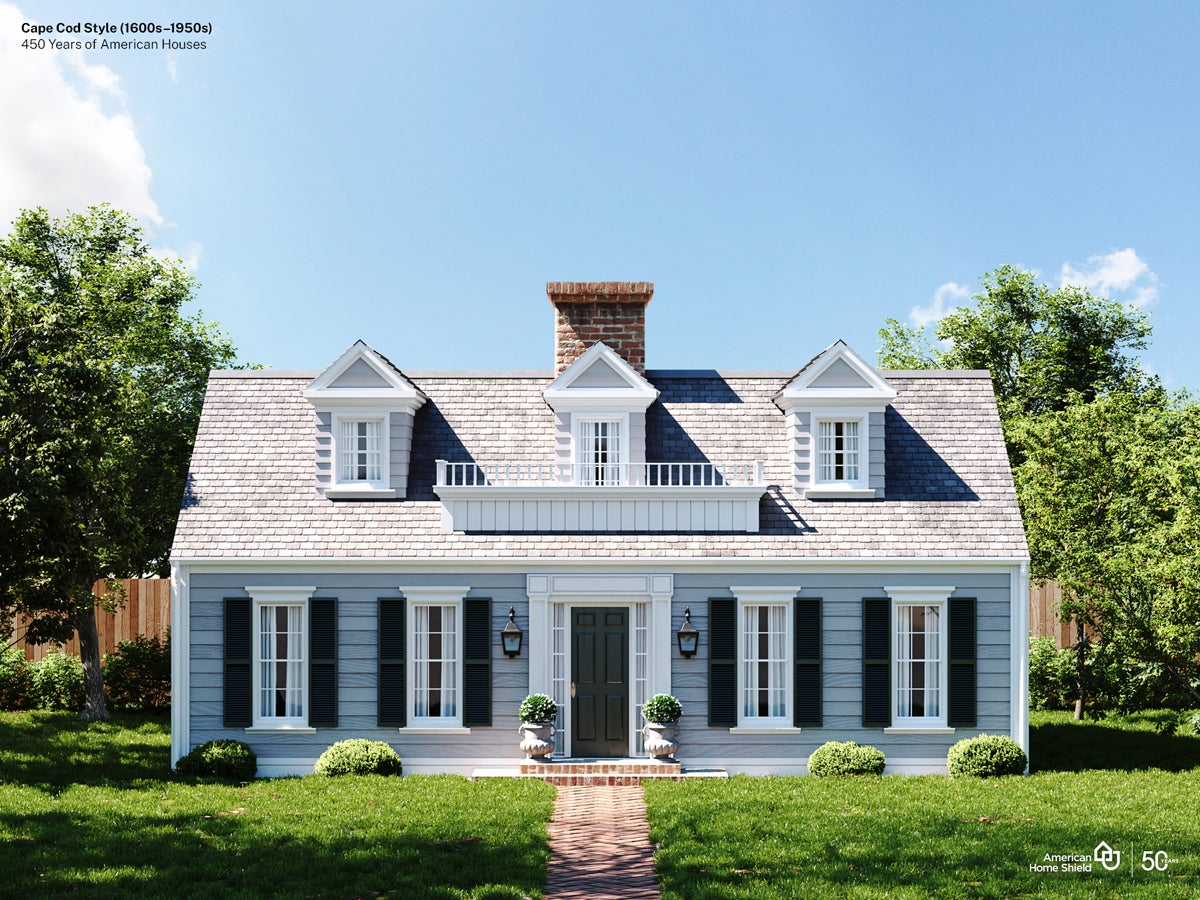 Historical preservation and a renewed interest in Cape Cod style homes in the early 20th century have secured the Cape Cod-style home’s place in American architecture.

As the economies of the colonies grew, so did their houses.  So named for the succession of four King Georges that defined the Georgian era of British society, the Georgian Colonial homes in America shared many features of estates in major British cities like London, Edinburgh, and Bath, as well as elements of classical Greek and Renaissance Italian architecture. 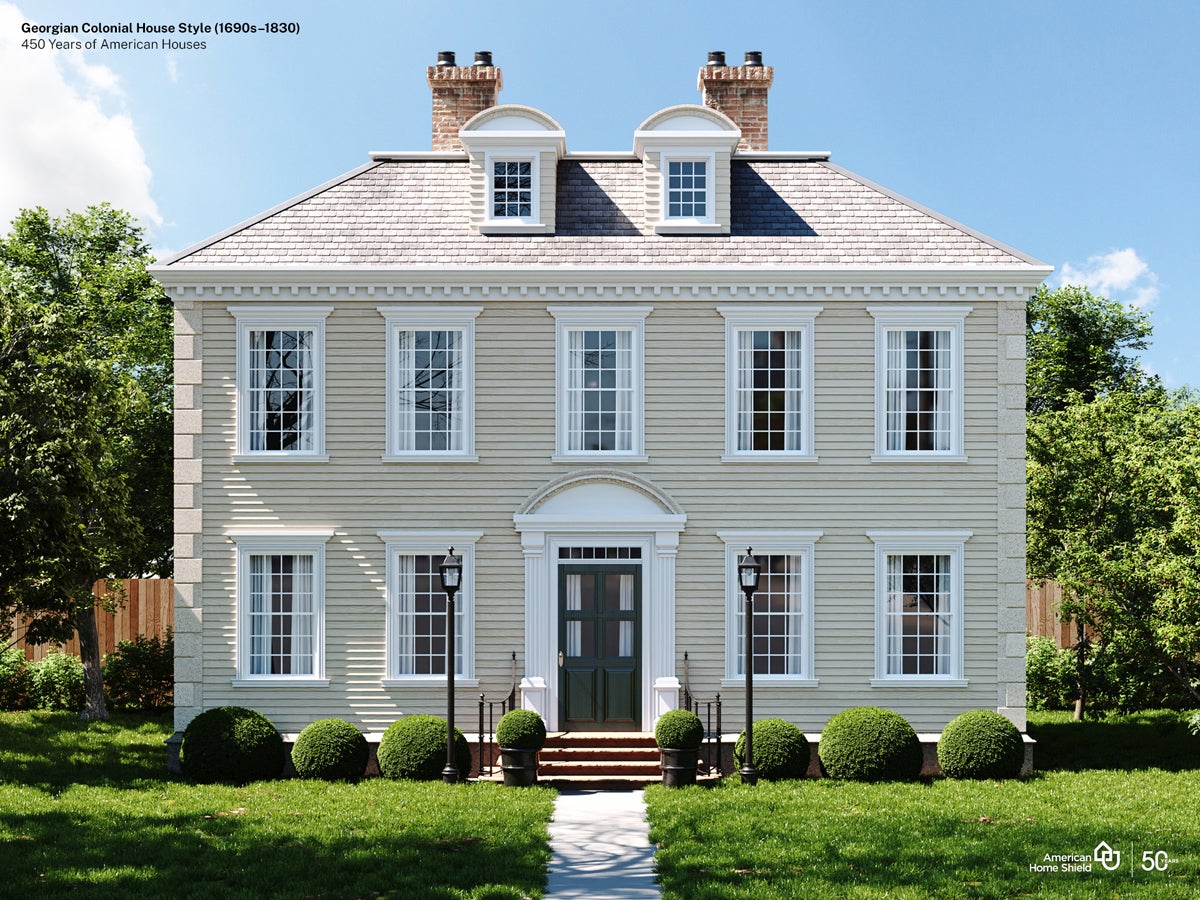 The emergence of Georgian homes also marked a shift in the architectural profession in America. While the architectural profession had largely been the domain of craftsmen, many architects were beginning to take on the role of artisan. Incorporating features like paired chimneys, crown molding, and five-window rows, the relatively ornate nature of Georgian homes allowed architects of the era to design in high style.

The crusade to build a new society in the wake of America’s independence from Britain included efforts to create a new, American style of architecture. This rendering shows a home designed in what has become known as the Federal style, used to describe the style of architecture used in homes, public buildings, and planning projects in the period following the American Revolution.

Just as the United States was founded based on principles originating from Ancient Greece and Rome, Federal Style architecture borrows from Greco-Roman design history. The library at the University of Virginia, for example, is modeled after the Pantheon in Rome. Many of the columns and colonnades used in federal buildings are inspired by Ancient Greek architecture.

America’s cultural debt to Greece grew in the mid-19th century, as archaeologists began to unearth new architectural marvels from Ancient Greece and architects began to borrow from their illustrations of them. This rendering depicts a house in what is today known as the Greek Revival style, featuring bold, simple moldings, a pedimented gable, and a wide, plain frieze. 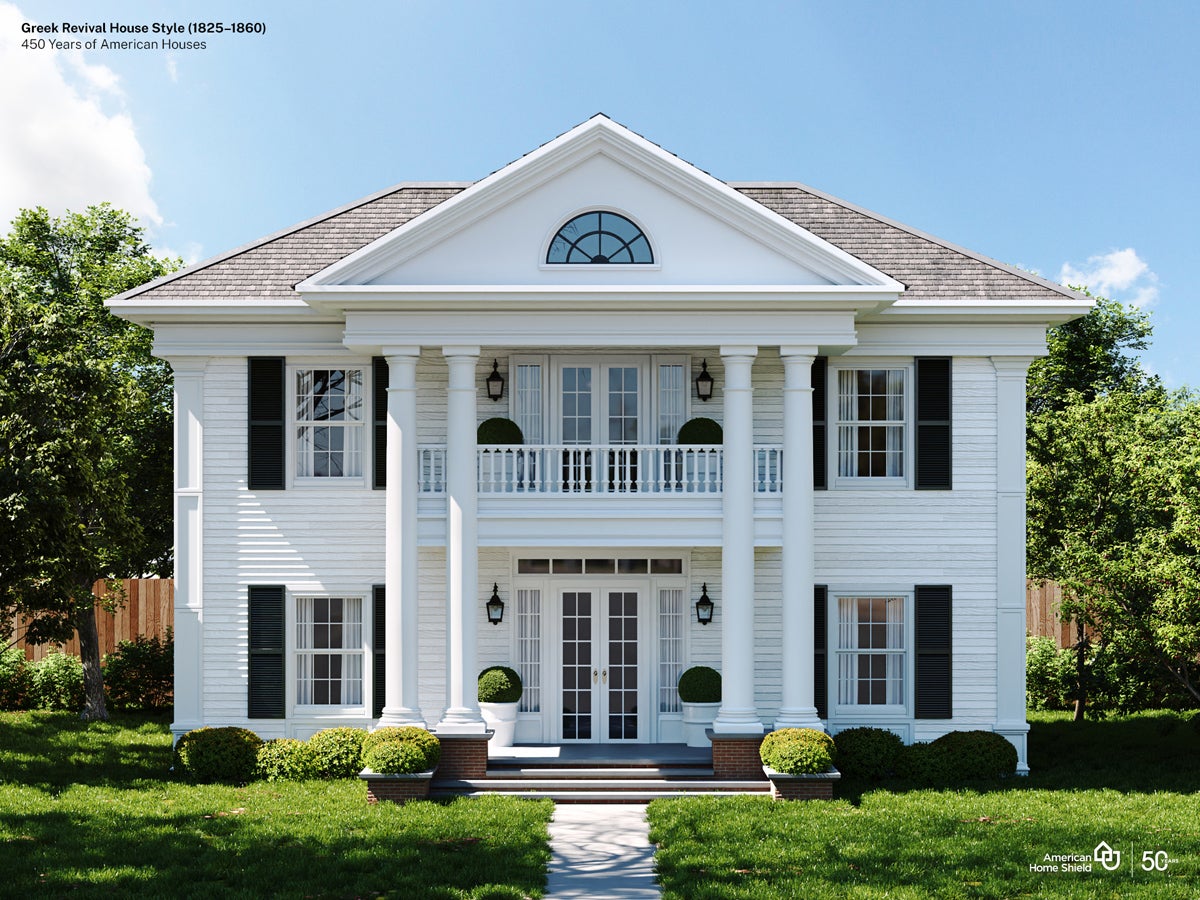 Other notable features in our rendering characteristic of the Greek Revival style include decorative pilasters, the entry porch with columns, and the narrow windows around the front door. 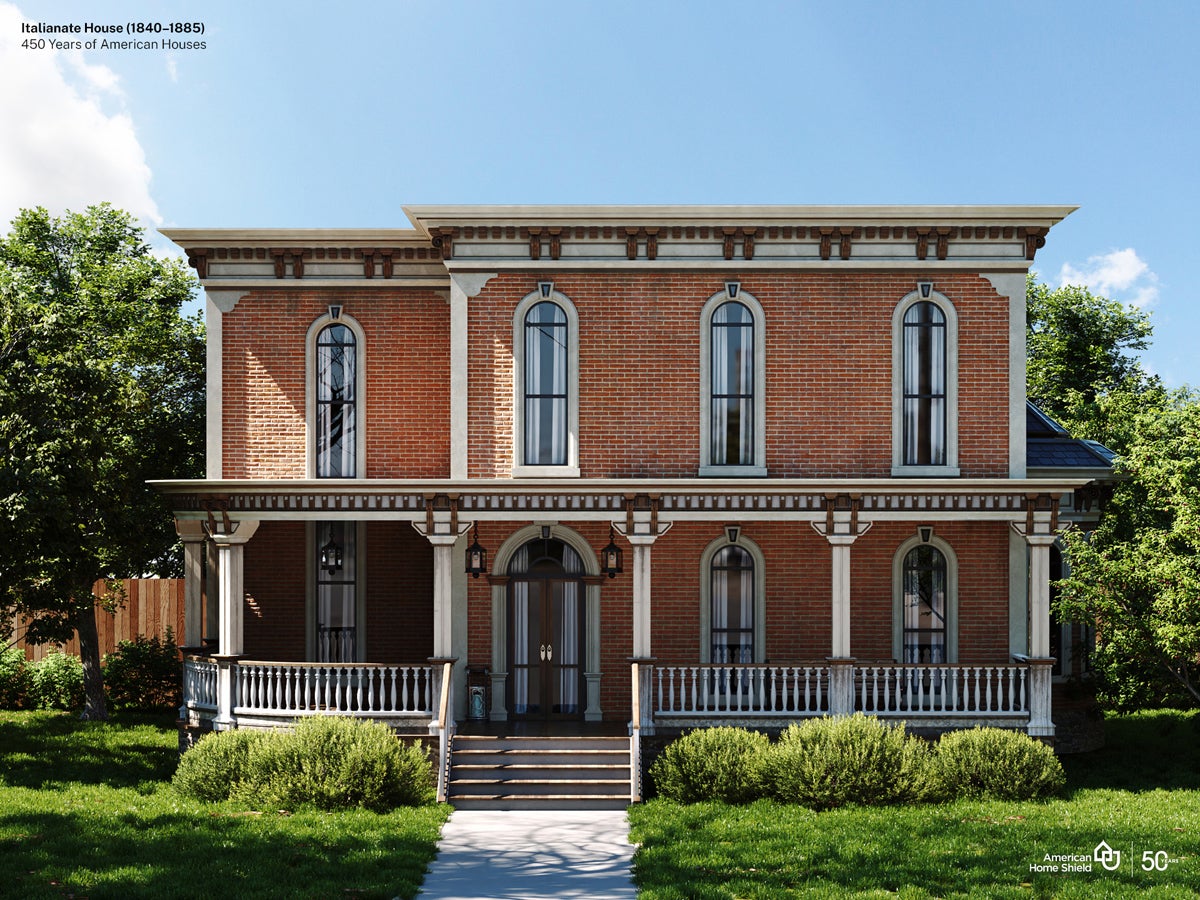 The Industrial Revolution brought new production methods, materials, and riches to the American public, and spurred an architectural style exploring these new possibilities. The Queen Anne style emerged in America during the end of the 19th century, featuring excesses of design evocative of British monarchy. This rendering shows a single-family home designed in the Queen Anne style. 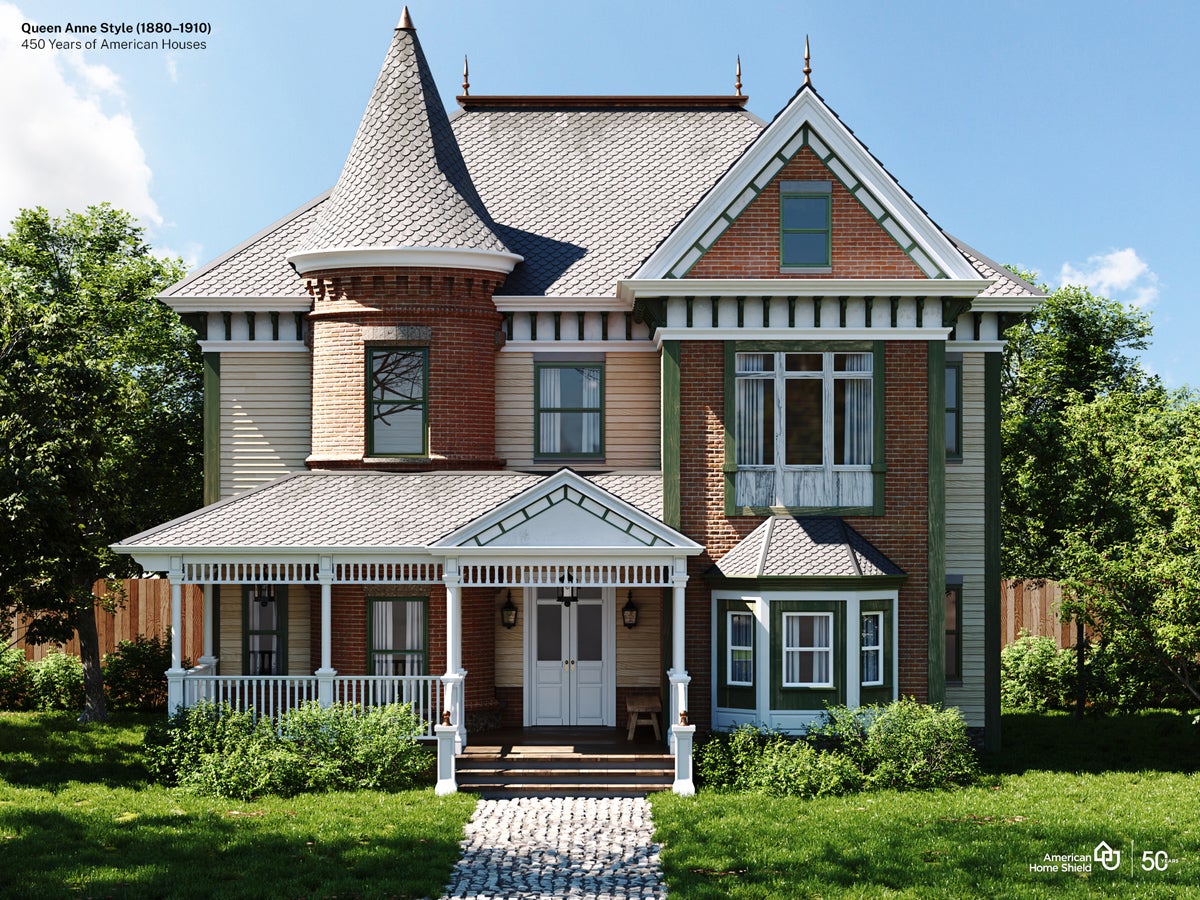 Some features in our rendering that are characteristic of the Queen Anne style include the steep roof, round turret, and bay window. The design is asymmetrical, complicated, and filled with decorative flair.

Just as the new money and manufacturing methods of the Industrial Revolution led to new architectural styles, backlash to the period also spurred a unique design movement. The Arts and Crafts movement decried the impersonal, machine age architecture of the era, instead favoring thoughtful, handcrafted design that incorporated natural, locally-sourced materials and highlighted the hand of the designing artist. This rendering shows a single-family home in the Arts and Crafts style of the early 20th century. 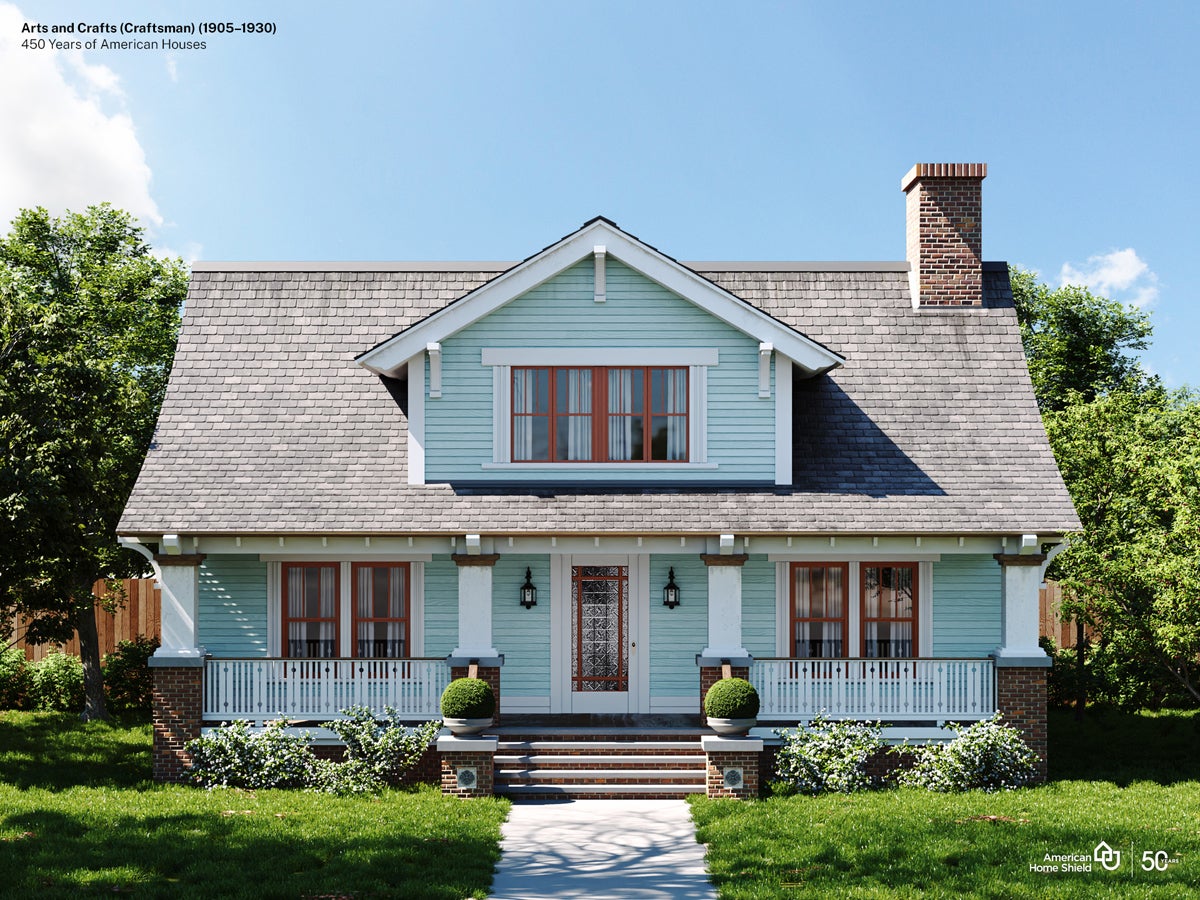 The low-pitched roof, wide, overhanging eaves, and porch with thick square columns seen in the rendering are features commonly associated with the Arts and Crafts style. The numerous windows also helped create the light-filled interior rooms popular in the design movement.

As architecture matured from a trade to an art form, designers began to borrow from burgeoning artistic movements of the day. Art Deco combined the simple geometric forms of modernism with fine materials and expert craftsmanship and influenced the field of architecture as well as product design, carmaking, and fine art. This rendering shows a single-family home in the classic Art Deco style. 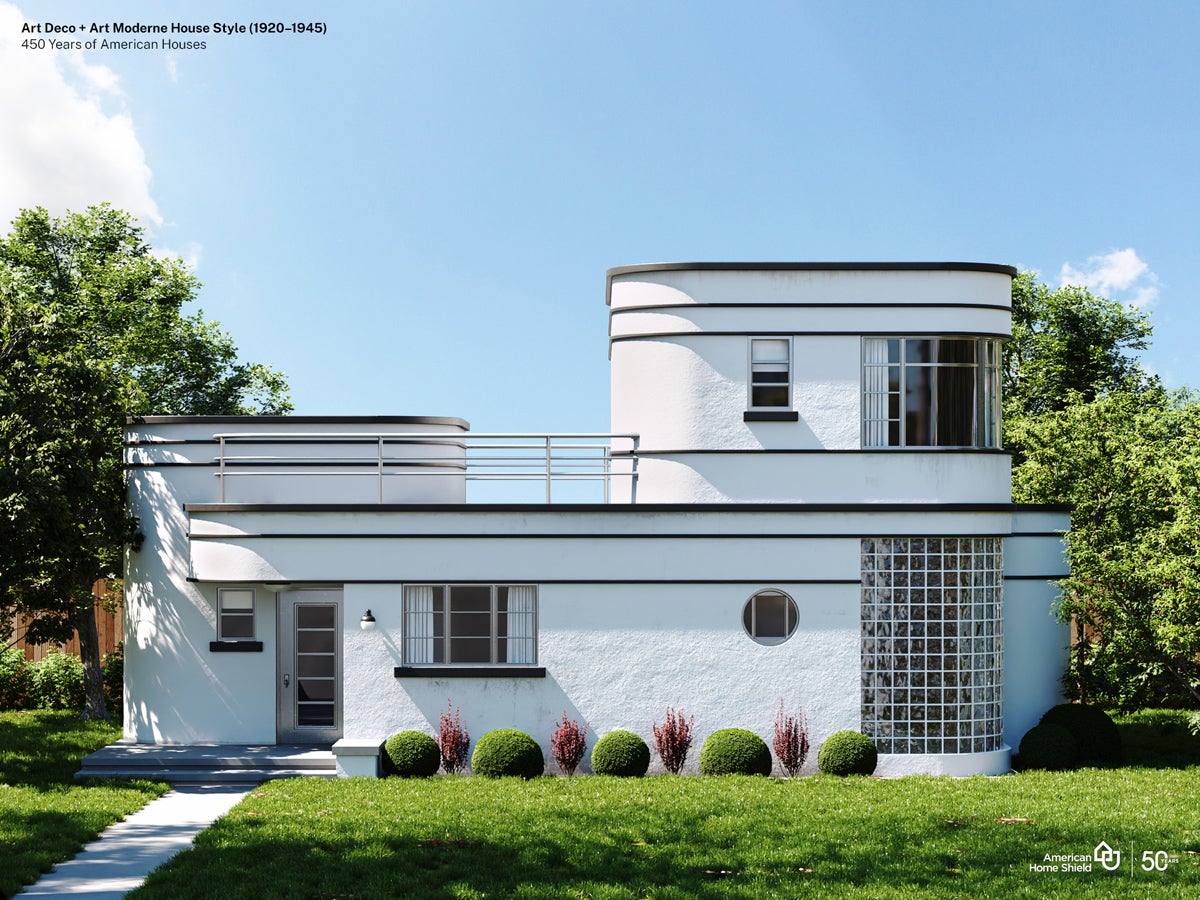 The Ranch style home was the confluence of several American cultural and demographic trends, including modernist design, westward expansion, and the post-WWII population boom. Modeled after Spanish colonial architecture, these one-story homes were built with simple designs and native materials. Ranch homes were easy to build, which contributed to their popularity in a time when the demand for new single-family homes was skyrocketing. 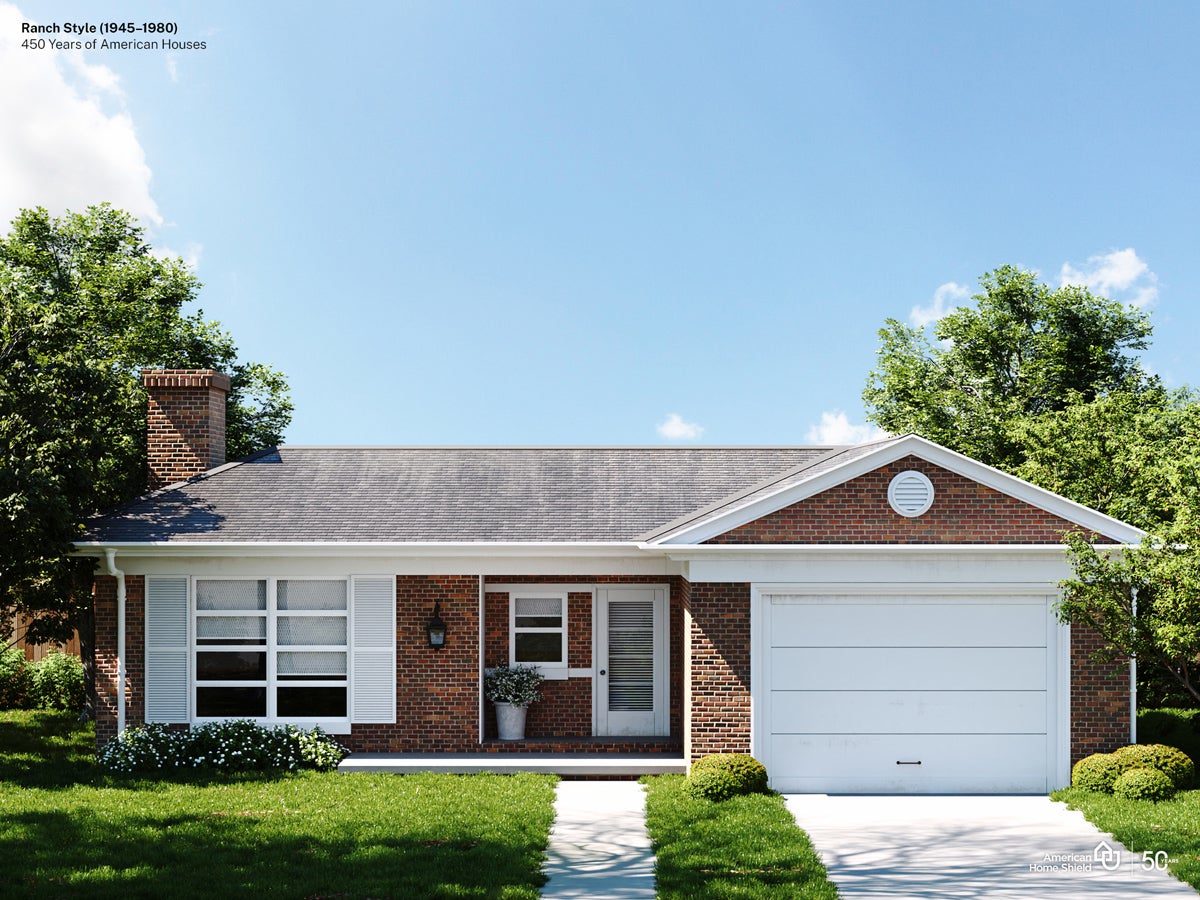 Ranch homes have simple floor plans and an openness reminiscent of the wide-open spaces of the American West.  Other notable features in this rendering include the low-pitched gable roof, brick exterior, lack of decorative detailing, and large double-hung window.

As U.S. soldiers came home from World War II and began to start new families, the population expanded rapidly -- creating an unprecedented demand for new housing. One way developers met this need was through the prefabricated home, a house manufactured with relatively inexpensive materials off-site that is then shipped to the site of its permanent residence. As this rendering shows, many prefabricated homes are built with mid-century modern or futurist design, which go well with the minimalist production methods. 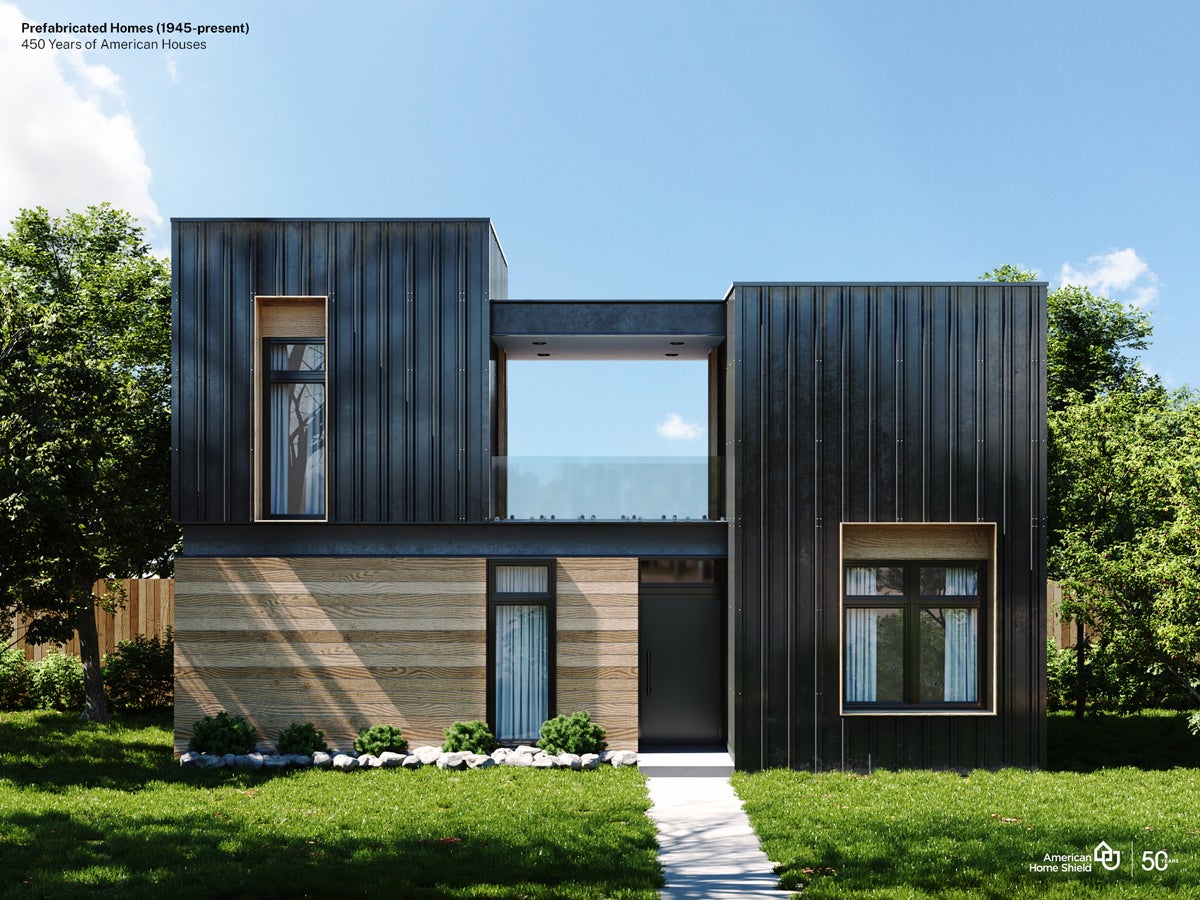 Modular prefabricated homes often use inexpensive, durable materials like wood paneling, sheet metal, and steel frames. And as a new generation of young Americans look to settle down, the prefabricated home offers one of the cheapest paths to homeownership -- so don’t be surprised if a new prefab home pops up in a neighborhood near you!

A History of the American Experiment

Vila, B. ​​The Federal House bobvila.com

Knierim, A (2019) What Is an Arts and Crafts Home? thespruce.com

Salant, K. (2006) The Ranch, an Architectural Archetype Forged on the Frontier washingtonpost.com

Modular. What is Modular construction? modular.org

Jones, J. (2020) U.S. States Where Manufactured Housing Is on the Rise constructioncoverage.com

NO TWO HOMES ARE THE SAME. THAT'S WHY WE HAVE OPTIONS. FIND A PLAN THAT FITS.
Shop Plans
See more in:
Home Buyers Popular HomeownersDecor

How heating problems compare among the 15 largest metros

How heating problems compare among the 15 largest metros

Moving to Austin, TX? Take this American Home Shield quiz to discover what are the best places to live in Austin, Texas, that will best suit your lifestyle!