Air conditioners work by removing heat from the inside of your home and releasing outside. Learn more about the process of AC and the importance of the five main components. 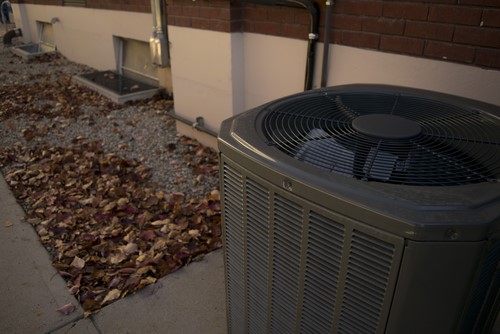 How does air conditioning work exactly? The simple explanation is that heat is removed from the inside of the house or room and released outside. To really dive deep, though, you need to ask yourself, “What are the components of an A/C unit?” There are five main parts that make the process of removing heat possible: the refrigerant, a compressor, a condenser, an expansion valve and an evaporator coil. Let’s take a look at each one and the function it plays in making your life a little easier to tolerate.

Related: A/C Not Working? 3 Steps to Troubleshoot Your A/C

From A to C

First things first: Let's take a look at how the air conditioner came about. Along with the Easter Bunny and the Tooth Fairy, air conditioning is one of the great mysteries of the universe, right? Well, no. Like many other science-based inventions of the past, someone identified a problem and set out to find a solution. This particular someone was Willis Carrier. Surprisingly, the problem was not uncomfortably hot air; it was humidity control at a printing company in Brooklyn, New York. In 1902, Carrier designed a machine that increased humidity levels by heating water and decreased humidity by cooling it. So the cooling aspect was actually a byproduct of the process of dehumidifying air. That became the first air conditioner.

With WWI, the crash of the stock market in 1929, then WWII, the industry was slow to reach the middle class market until the baby boom years of the 1950s and 60s. Now, with air conditioned homes, workplaces, stores and cars, many people spend a minimum amount of their time in unconditioned air.

At the most basic level, air conditioners operate on the principle that liquids absorb heat as they convert to gases. Residential air conditioners use two common refrigerants to achieve this process on demand: R-22 and R-410A, both hydrochlorofluorocarbons.

R-22, also known as Freon, was the most common air conditioning refrigerant for decades. However, the Environmental Protection Agency (EPA) has identified it as a substance that depletes the ozone layer and has enacted a plan to completely phase out its use by 2020. It is being replaced by R-410A, a more environmentally friendly alternative.

Regardless of which refrigerant your unit currently uses, they both serve the same basic purpose: to absorb heat from the air within your home and convert from a liquid to a vapor, cooling the air.

Of course, that’s not the end of the story. Besides refrigerants, your AC unit has four key parts that each play an important role in maintaining a comfortable temperature inside your house.

The evaporator is similar to the condenser, in that it is a coil and fins that air is blown across. The difference is that the refrigerant loses heat in the condenser and gains heat in the evaporator. The very cold refrigerant moves into the evaporator coils, which are contained in a closed part of the air handling unit or furnace. It is closed off from the surrounding attic or basement air, but it’s open to the inside air of the house in the ductwork. A blower moves the house air across the cold coils. Since the house air is warmer, the heat is removed from the house air and added to the refrigerant. The cool air then moves into the house through the duct vents. It is pulled through the house and back into the air handler unit again and again, until the temperature of the refrigerant rises above its boiling point, turning it back into a vapor. We are now back to where our explanation began. The vapor then leaves the house and moves into the compressor, and the cycle begins again.

So did Willis Carrier actually accomplish what he set out to do? Absolutely! As the warm air of the inside of the house moves across the evaporator coils, it loses heat to the refrigerant, dropping the air temperature. With that, it also loses water vapor, or humidity. This water pools in a drain pan and is removed through a drain pipe, thus dehumidifying the air in the house.  That’s what Willis Carrier set out to do in the Brooklyn printing shop back in 1902. And, thanks to him, now you can enjoy your cool, dehumidified, demystified, air conditioned air, too.

Next, after the refrigerant has vaporized, it moves to the compressor. In central AC units, this is located outside of your home. The refrigerant needs to be returned to a liquid state for your unit to keep functioning properly. The first step in this process happens inside the compressor, where the pressure and temperature of the refrigerant gas are increased.

Following the compressor, the hot, pressurized gas moves on to the condenser for the third step in the process. From here, the refrigerant is cooled and becomes a liquid again and is returned to the home. This process produces additional heat, which the AC unit filters outside through condenser coils and a fan.

The expansion device plays a basic, but important, role. It controls the flow of refrigerant into the evaporator.

While there are some variations depending on the type of unit in question (wall or central AC, for example), all air conditioners have the same basic parts and operate on the same basic system.

While the principles on which an air conditioner operates are relatively simple, an AC unit is still a piece of machinery that requires routine care and maintenance to avoid malfunctions. There are basic checks you can perform yourself, such as replacing your unit’s filter and making sure that your outdoor unit is sitting level, is free of debris, has at least two feet of space around it and has proper insulation around the refrigerant lines.

Still, there are times when it pays to have the professionals take a look at things. Of course, if you turn on your unit and hear a strange noise or you notice that your rooms are not cooling properly, it’s definitely time to call in an expert. You can elect to have air conditioning professionals check your unit annually, typically once in the spring and once in the fall, to ensure proper function and refrigerant levels.

Despite your best efforts to avoid it, there may be a time when your air conditioning acts up. Of course, this always seems to happen when temperatures soar. An American Home Shield® home warranty can help provide protection for unexpected issues and covered components of your air conditioner. Learn more about air conditioner coverage.

OUR BEST PLAN IS ALL-IN ON COVERAGE SO YOU CAN LEAVE THE HOME HASSLES TO US.
Shop ShieldPlatinum >
See more in:
HVAC

Hold, Fan, or Auto? Set Your Thermostat to Save Money

Hold, Fan, or Auto? Set Your Thermostat to Save Money

How to Conduct Your Own A/C Maintenance | AHS

HVAC Warranty: What to Expect from AHS® Warranty Coverage | AHS

If you're experiencing HVAC issues, this guide covers how your American Home Shield® HVAC warranty works and what to expect from your coverage.