How to Prevent Frozen Pipes from Ruining Your Winter Wonderland

Burst pipes are among the most common causes of property damage during the winter, and they are most often due to frozen pipes. Follow these tips to learn how to avoid frozen pipes this winter. 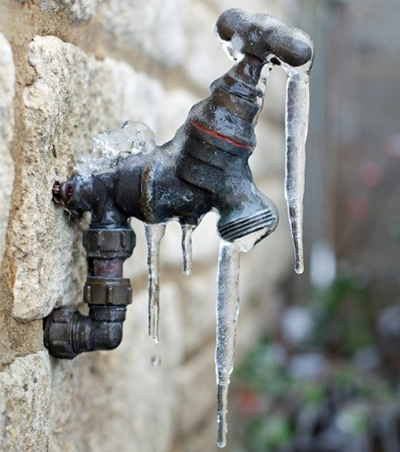 Is there anything worse than waking up on a cold winter’s morning to the sound of rushing water, only to discover that a pipe has burst somewhere under or, god forbid, inside your house? Frozen pipes can be a nightmare, and burst pipes are among the most common causes of property damage during the winter. Even interior pipes can burst if temperatures drop far enough.

Fortunately, there are ways to prevent frozen pipes. Take the right steps to prepare your pipes for winter, and you’ll stop frozen pipes from wreaking havoc on your home.

The Damage Frozen Pipes Can Do

Pipe freezing is a huge problem because of the significant damage it can do. Water expands when it freezes, and this can put immense pressure on pipes. When water pipes become frozen, the pressure of the expanding water can cause the pipes to break, and that can cause water damage, corrosion, and rust. Your home warranty may not cover frozen pipes, but they can be prevented.

Before the weather turns frigid, take steps to prevent your pipes from freezing. Pipes that are exposed to the elements are most likely to freeze. These include swimming pool supply lines, outdoor hose bibs and spigots, water sprinkler lines, and pipes in unheated areas, like basements, attics, crawl spaces, garages or even in kitchen cabinets. Pipes that run against poorly-insulated exterior walls are also at risk.

Prepare your pipes for winter by shutting off water to and emptying any outdoor pipes and spigots. Drain swimming pool and sprinkler lines. Drain and store hoses. Turn off the inside valve to outdoor bibs and spigots, but leave the outside valve open to both drain the exterior pipe and allow any water remaining inside it to expand without breaking the pipe.

Protect pipes in your attic, basement, crawl space or garage by adding insulation to these areas. This will raise the overall temperature in these places to stop frozen pipes. You should also insulate pipes in unheated areas, including in kitchen and bathroom cabinets, against exterior walls in garages, attics, crawl spaces or basements.

You have some options when it comes to insulating your pipes. The best thing to do is install a pipe sleeve, heat cable or heat tape on exposed pipes. If you can’t afford this or temperatures in your area don’t typically drop far below freezing for extended periods, you can wrap newspaper around your pipes to insulate them. A quarter-inch of newspaper can provide important insulation to keep pipes from freezing in milder climates.

Once you’ve turned off the water to exterior pipes and bibs and insulated exposed pipes in unheated areas, you’re still not done. Don’t get complacent – stay on guard to keep your pipes flowing properly until warm weather returns.

Keep your garage doors closed as much as possible to protect pipes in the garage. Open cabinet doors in the kitchen and bath to let warmth circulate around the pipes. Keep your thermostat set to the same temperature day and night – it might raise your heating bill a little bit, but that’s nothing compared to what you’ll save by avoiding frozen water pipes.

If you’re going to be away from home for any length of time in the winter, make sure you leave your heat on and set the thermostat to at least 55 degrees Fahrenheit to protect pipes from freezing while you’re away. The last thing you need after a relaxing beach vacation is to come home to a house full of water from pipes that froze, burst and sprayed water into your home for days or weeks on end.

Of course, if it’s extremely cold outside, even interior pipes in heated areas can freeze. If you live in an area where the winters are harsh, keep your pipes from freezing on the coldest days and nights by letting water trickle from your taps inside the house. Even if you just let the taps drip, it could prevent frozen pipes.

If you open a tap then only a trickle of water comes out, or no water at all comes out, this most likely means the pipe has already frozen. If the pipe has not yet burst, you can still save it. Leave the tap open, and apply heat to the frozen pipe using an electric hair dryer, a heating pad, a portable space heater, or hot, wet towels. You’ll know when the pipe has thawed because water will be flowing normally again from the open tap. Take steps to insulate the pipe in question so it doesn’t freeze again, and check the other pipes in your house to make sure they’re not frozen too.

Frozen pipes are more vulnerable to rust and corrosion, and can even burst, causing water damage inside your home. Once you learn how to prevent frozen pipes you can enjoy snow, hot cocoa and evenings in front of the fire, without the stress of major home repairs.

OUR BEST PLAN IS ALL-IN ON COVERAGE SO YOU CAN LEAVE THE HOME HASSLES TO US.
Shop ShieldPlatinum >
See more in:
Plumbing Homeowners Seasonal

What is a Plumbing Vent Pipe and Why Do I Need It? | AHS

What is a Plumbing Vent Pipe and Why Do I Need It? | AHS

Learn how to spot the signs of rusty pipes and pipe corrosion, what you can repair yourself, and when it's time to call a professional.

How to Fix & Detect a Leaking Pipe | American Home Shield

If you suspect one of your pipes might be leaking, AHS will guide you through how to detect and repair leaking pipes.