Clearing the Air: the Difference Between R-22 and R-410A

If you're tired of the heat, then you probably use your air conditioner. Learn how the recent EPA changes to R-22 affects you and if you need R-22 or R-410A. 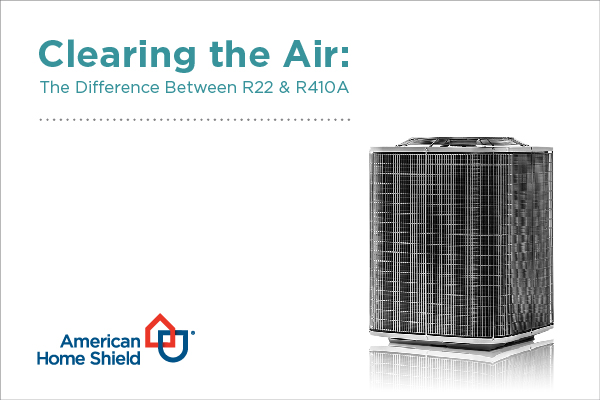 You may know that the most popular refrigerant — the substance that is used to cool air in A/C units — is called “Freon®.” There are several types of Freon, named based on their boiling points (for example, Freon-11, Freon-12). But did you know that the most-used Freon is officially referred to as “R-22” (Freon-22)? And that it has a “refrigerant rival,” known as “R-410A”? Which Freon is used in home A/C units? Both, although R-410A often goes by the trade name “Puron®” instead of “Freon.” Although they both perform the same duty, there’s one main difference between R-22 and R-410A: One is harmful to the environment, while the other is hailed as the “New King in Town.” Read on to find out which one is which. (Hint: It may surprise you.)

Although Freon (otherwise known as R-22) has become a household name and the main home air conditioner refrigerant used for decades, it now has a stigma attached to it. Unfortunately, because of its widespread use, the U.S. Environmental Protection Agency (EPA) has determined that it’s an ozone-depleting substance, and therefore, needs to be eliminated. As a result, the EPA has implemented a nationwide R-22 refrigerant phase out as part of the Clean Air Act that calls for a complete shutdown of R-22 production by the year 2020.

Related: 5 Things You Need To Know About R-22 Refrigerant

The home air conditioner refrigerant to the rescue? Good ’ol R-410A. Hailed as the most popular ozone-friendly refrigerant option, it also goes by the brand names "Puron," “GENETRON AZ-20®,” “SUVA 410A®” and “Forane® 410A.”

Next Step – Making the Transition

So if R-22 is so bad and R-410A is so good, we should just add the latter to our units when the former runs out, right? Wrong. Well, sort of wrong. Yes, we all need to eventually transition to R-410A. And, yes, you can convert your R-22 unit to an R-410A unit. However, the refrigerants have different qualities and requirements, so it’s like converting a diesel car engine to one that runs on gasoline — it’s not done without making major changes to the system. The refrigerants have very different heat-transfer properties and use chemically incompatible lubricating oils, so they aren’t interchangeable and can’t be mixed. Transitioning one unit to the next could require replacing the compressor, evaporator and condenser, along with potentially replacing their copper lines. And the “retrofitted” unit must be completely void of any water vapors before charging it with the new R-410A. Basically, if any part of the transition is not done properly, you’ll have a unit on your hands that quickly fails.

The process of retrofitting your unit requires a professional and could potentially void your manufacturer’s warranty on your unit. Your best bet? A total system replacement, especially if your current unit is already at least 10 years old and you’ve been consistently experiencing cooling issues and higher energy bills. Yes, it’s a large investment, but when it’s all said and done, you’ll have a new unit that isn’t just ozone-friendly — it’s also more energy efficient, too.

Related: Is it Time to Upgrade Your AC?

A Note About Availability

In July of 2017, The News published an article about supply struggles in China and anti-dumping duties established by the U.S., affecting the price of R-410A and other refrigerant components. According to its author, Ron Rajecki, a 25-pound cylinder that was selling for about $150 the previous December had increased to about $240 by July — and the price was expected to climb even more over the coming months. Because of this, you may want to speak with a local trusted HVAC company or your home warranty representative before making the switch to R-410A, as it may be more cost-effective to use a different ozone-friendly alternative or wait until the shortage has been resolved.

Want to learn more about the EPA’s R-22 regulation? Check out our other articles in the “Clearing the Air” series about breaking down the regulation and what it takes to transition out of R-22.

Related: When Should I Service My Air Conditioner?

How To Find A Good Contractor: Top Questions to Ask During the Repair Inspection

Finding a reliable home repair contractor is important. Learn what questions to ask to screen contractors before work is ever done and how to evaluate the repair.

Reduce Your Water Bill with a Low-Flow Toilet

Thinking of installing a low flow toilet? Whether you're looking to save money on water costs or to be kinder to the environment, find out the pros and cons.

Are Ceiling Showers the Next Big Trend in Bathroom Design?

Want a spa-like experience in your bathroom? Then maybe a flush mount shower head is right for you. Learn what to consider before installing a ceiling shower head.