Scientific Breakthrough Could Mean The End Of Lost Socks

Wool Socks, Shoe Socks, Dress Socks - Where Have They Gone? Quantum Physics could reveal why losing your socks in the dryer is no longer a mystery of the universe.

It’s an experience that’s as frustrating as it is familiar: You’re folding and putting away your laundry, only to discover that one or several socks has somehow lost its partner. Not that you can exactly recall dumping complete pairs into the washer, but you can’t shake the certainty that all socks were present and accounted for in your first sort through “the dirties.”

Through the years, many fanciful stories (myths, let’s call them) have been advanced to resolve this mystery. Perhaps you heard tales of one-legged burglars, or plumbers called to unclog a drain discovering a Hoover Dam’s-worth of socks in the pipes leading out of the laundry room, or even entertained your kids with stories of a “sock fairy” who ensures that feet all over the world remain sheathed, warm and dry.

Unbeknownst to most homeowners, however, a consortium of leading manufacturers has been studying the “missing sock problem” for the past two decades. Elena M. Schloss, a spokesperson for the National Association of Makers of Major Home Appliances (NAMMHA), has this to say in a press release issued today in advance of the publication of the first meaningful results of this research:

“Over the years, missing socks have been No. 1 on our industry's list of customer complaints. And it’s been a complaint to which we've never been able to respond adequately. In fact, for far too many years, our engineers and sales personnel assumed operator error was to blame. Maybe some Gen-X Americans even remember the PSAs the industry used to air about ‘minding the gap’ between the home washer and dryer? In any case, this is the 21st century, and we now take a more enlightened view on the causes and consequences of chronic sock attrition," said Schloss.

Only with CERN’s completion of the Large Hadron Collider (LHC) in Switzerland in 2008 have scientists been able to test a variety of theories advanced to account for this household enigma. The results of this testing have been revolutionary. As the British science journal Nature, will report in greater depth next week in a cover story, physicists have constructed a working cosmological model that explains what happens to those “missing” socks. Most unexpectedly, this same model offers the first demonstrable (if inadvertent) proof of string theory. In the words of Max Schrödinger, an AHS-approved contractor in Mercury, Nevada, who also holds an advanced degree in applied quantum electrodynamics from Miskatonic University,

“Humanity is now following socks into an entirely new realm of time and space, a realm consisting of more dimensions than we ever previously imagined existed," said Schrödinger. 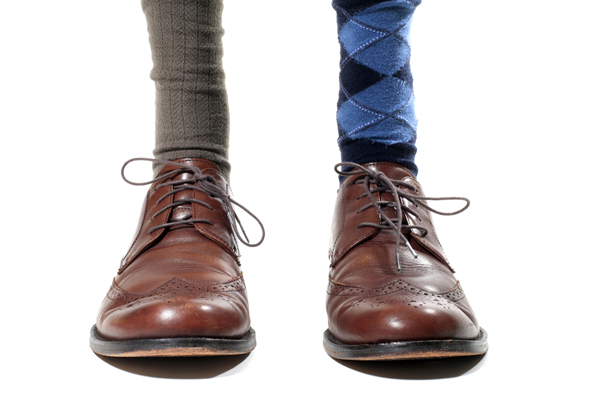 What happens to missing socks in the laundry

The key to understanding what happens when a sock appears to go missing in the laundry, as Schrödinger makes clear, is that the sock has not actually disappeared. Instead, the sock is simply no longer observable.

“We have to accept, as string theory postulates, that, at the subatomic level, all matter is neither particle, nor wave, but instead some entity that combines elements of both. We call these objects ‘strings.’” said Schrödinger.

So, what how does string theory explain missing articles of clothing? Schrödinger, again: “A combination of factors inside your standard household make it an ideal environment in which to amplify, distort and otherwise perturb these subatomic strings. Static electricity, heat and tumbling action all combine to upset what in string theory are known as ‘branes.’ Think of a brane as being like elements of dimension like height, width and depth, or volume. There are additional dimensions that cannot be represented on a specific brane and that we don't fully experience. We are surrounded by these branes and they are constantly intersecting. If they intersect in the right unsettled environment—say, you're dryer—branes can overlap. Thus, your socks go missing—or are simply no longer observable."

But why socks? Schrödinger’s answer is so simple it almost makes too much sense to be of much sense.

“Socks are just big long threads or strings in an unstable pattern. No matter what the scale, a sock is a string. Think about it: The long, tube-like shape of a sock mimics string. A sock is like a string within a string within a string onto infinity. Your boxer briefs and collared shirts are more complex structurally and just aren’t as vulnerable to the kind of exponential vibrational manipulations your dryer exerts upon socks,” said Schrödinger.

So, armed with this information (and, according to Schrödinger, we still have much to learn about “the missing sock brane, or s-brane”) what can you do to prevent your laundry from falling victim to Heisenbergian uncertainty? 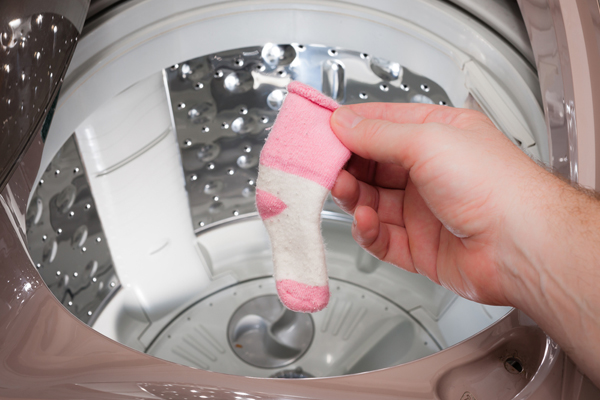 How to wash socks without losing them

• Before drying, collect all your socks and secure them in a tin foil enclosure. Be careful of escaping steam when opening this packet upon removing it from the dryer.

• Use garters or bungee cords to attach the socks to the “blades” of the dryer drum.

• Clean your lint trap. Studies show promising evidence that this helps wrangle some of the energies emitted by your dryer (in addition to helping prevent fires and clothes dry faster.)

• Place a large, heavy object on top of your dryer to alter the waveforms generated by its tumbling, fanning and venting.

• Initial tests at CERN suggest that adding a certain amount of filler (e.g., a quantity of Styrofoam packing peanuts) to a dryer load in order to absorb and disperse excess energy may also help prevent chronic sock attrition. However, these tests are inconclusive; socks still go missing, even on low heat or gentle cycles, and even the filler material seems to be susceptible to the same quantum unpredictability as socks.

Next > What is a Washing Machine Drain Pan and Why Do You Need One?